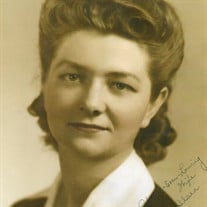 Mrs. Clara Hylle, 98, of Wynne, Arkansas, died on Sunday, September 15, 2019 at her apartment at Southern Independent Living. Clara was born in Wynne, Arkansas, on November 30, 1920 to the late John and Rose Schneider Hess. She was a graduate of Mt. Saint Mary's Academy in Little Rock and also attended business school. She was an Oblate of St. Benedicts at Holy Angels, Jonesboro, Arkansas, since 1984. Clara volunteered as a driver, taking patients to hospitals and appointments in Memphis, Little Rock, and Jonesboro. She also volunteered for the Heart and Cancer Societies. She was the president for the National Catholic Eastern Deanery Council of Women for 1970 and 1971. Clara loved to preserve food by canning and freezing and loved to cook and share with her friends and neighbors. She loved flowers and gardening. Clara was a member of St. Peter's Catholic Church in Wynne, St. Peter's Altar Society and the Women's Guild. She is survived by her sons, Robert Hylle of Riverton, Wyoming, David Hylle and wife Kay of Wynne, Laurence Hylle of Wynne, daughter, Patricia Steen and husband Rob of Riverton, Wyoming. She is also survived by her sisters, Margaret Boeckmann, Betty Buergler, Dorothy Dettlinger, Ruth Wilson, brothers, Paul Hess, Bobby Hess, stepbrother, Larry Poland, 13 grandchildren and 16 great grandchildren. She was preceded in death by her parents, John and Rose Hess, husband, John Hylle, daughter, Elizabeth Loveday, brothers, Gilbert, Albert, Raymond, and Billy Hess, sisters, Rose Marie Long and Agnes Sorce. Memorials may be made to St. Peter's Catholic Church or to the charity of the donor's choice. Rosary will be held on Wednesday, September 18, 2019 beginning at 9 AM at St. Peter's Catholic Church. Visitation will follow Rosary at 9:15 AM until 10 AM. Funeral services will follow at 10 AM. Burial will be in Johnson Cemetery, Fair Oaks, Arkansas.

Mrs. Clara Hylle, 98, of Wynne, Arkansas, died on Sunday, September 15, 2019 at her apartment at Southern Independent Living. Clara was born in Wynne, Arkansas, on November 30, 1920 to the late John and Rose Schneider Hess. She was a graduate... View Obituary & Service Information

The family of Clara A. Hylle created this Life Tributes page to make it easy to share your memories.

Send flowers to the Hylle family.