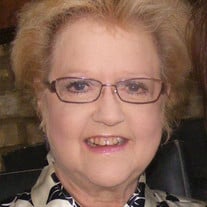 Cynthia “Cindy” Rose Slabaugh Jones, 64, of Wynne, died on Friday, August 9, 2019, in Memphis, Tennessee, at Methodist Hospice Residence. Cindy was born on January 28, 1955 in Memphis to the late Simon "Bill" Slabaugh and Marie Fitzgerald Slabaugh. She worked for the Colony Shop in Human Resources for 33 years. She lived in Wynne most of her life, having grown up in Parkin and was a member of the First United Methodist Church of Wynne. She is survived by her husband, Frank Jones of the home, daughters, Amanda Marie Ellis and husband Tony of Marion, Arkansas, Melanie Renee Walls and husband J. of West Palm Beach, Florida, brothers, Michael Slabaugh of Jonesboro, Charles "Chuck" Slabaugh of Marion, sister, June Marie Jenkins of Wynne, and grandchildren, Cole Ellis and Sydney Ellis. She was preceded in death by her parents, Bill and Marie Slabugh, and sister-in-law, Selita Slabaugh. Memorials may be made to the Arkansas childrens Hospital, 1 Children's Way, Little Rock, AR 72202, St. Jude 262 Danny Thomas Pl, Memphis, TN 38105 and Frist United Methodist Church of Wynne, 800 Falls Blvd N, Wynne, AR 72396. Visitation will be held on Tuesday, August 13, 2019 from 6 PM until 8 PM at Kernodle Funeral Home. Funeral services will be on Wednesday, August 14, 2019 at Kernodle Funeral Home at 10 AM. Burial will be in Cogbill Cemetery.

The family of Cindy Slabaugh Jones created this Life Tributes page to make it easy to share your memories.

Send flowers to the Jones family.