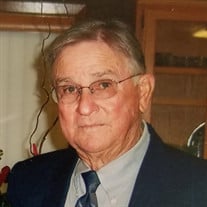 Mr. Charles Leonard "Buddy" Owens of Wynne, Arkansas, died on Saturday, June 8, 2019, in Jonesboro, Arkansas. Buddy was born in Dewitt, Arkansas on January 28, 1934, to the late Leonard Thomas Owens and Viola Harrison Owens. He married Martha Scoggin in 1956 and they raised three children, Sheila, Karen and Charles. He was a rice farmer and avid reloader. He was member of Union Avenue Baptist Church and was ordained a deacon at Union Avenue Baptist Church in 1986. He proudly served his country in the United States Army. He is survived by his wife, Martha of the home, children, Sheila West and husband John of Wynne, Karen Inman and husband Gary of Wabash, and Charles Lynn "Charlie" Owens of Wynne. He is also survived by brothers, Carrol Owens of Wynne, Dan Owens of Wynne, Cecil Owens of Wynne, sisters, Marcenia Hawkins of Wynne, Katheryn Hobbs of Colt, grandchildren, Joshua Dooley and wife Kathryn, Johanna Uribe and husband Esli and three great grandchildren, Beau Dooley, Cash Dooley and Sophia Sanders. He was preceded in death by his parents, Leonard and Viola Owens, sister, Evelyn Smith and brother Darrell Owens. Visitation will be held on Tuesday, June 11, 2019, from 6 to 8 PM at Kernodle Funeral Home. Funeral services will be on Wednesday, June 12, 2019, at 10 AM with burial in Ellis Chapel Cemetery.

The family of Charles Leonard "Buddy" Owens created this Life Tributes page to make it easy to share your memories.

Send flowers to the Owens family.