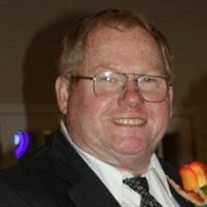 Carl Lee Andrews of Wynne, Arkansas, died on Sunday, May 3, 2020, at CrossRidge Community Hospital in Wynne. Carl was born in Wynne, Arkansas, on February 6, 1953 to Dora Lloyd Andrews and the late Amos Andrews. Carl married Paula on June 26, 1976 and they had four children, Carl, Stephen, Trey and Deborah. He was a foreman at the Arkansas Highway Department. Carl was a hunter, coin collector and loved spending time with his grandchildren. Survivors are his mother, Dora Lloyd Andrews of Wynne, sons, Carl Lee Andrews and wife Ashley of Bartlesville, OK, Stephen Andrews and wife Melinda of Blytheville, AR, Trey Andrews and wife Baylee of Des Arc, AR, daughter, Deborah Dowdy and Brandon of Forrest City, AR, grandchildren Alexis and Hannah Dowdy, Cody, Adelicia, and Christopher Andrews, Paiton, Dalaney, Braylynn and Bentley Andrews, Kayden Andrews, and Matthew Pitts. He was preceded in death by his wife, Paula Lundy Andrews in 2017, and his father, Amos Andrews. Visitation will be held on Thursday, May 7, 2020, at Kernodle Funeral Home from 12 to 2 Pm. A graveside service will follow at 2 PM at Cogbill Cemetery. You may sign an online guestbook at www.kernodlefh.com

The family of Carl Lee Andrews created this Life Tributes page to make it easy to share your memories.