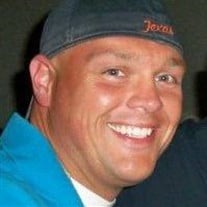 Alfred Buddy Watson of Vanndale, Arkansas, died on Monday, July 22, 2019, at the NEA Baptist in Jonesboro, Arkansas. Buddy was born on September 11, 1978, in West Memphis, Arkansas. Buddy loved his family, especially his children, Kayla and Caidan. He was an avid LSU fan and loved to cook. He was a 1997 graduate of Cross High School. His childhood dream was to work in Law Enforcement. He started his law enforcement career with Cherry Valley Police Department, served as Constable for Searcy Township, Cross County Sheriff Office, and Bureau of Prisons in Louisiana and Arkansas. He is survived by his daughter, Kayla Watson of Keiser, Arkansas, son, Caidan Melder of Louisiana, as well as his immediate family, Bill and Billie Hinchey, Gary and Donna Nickles, Matthew and Jeni Abbott and their sons, Eli and Sy Morris, Austin Abbott, Jared and Erin Caldwell and their daughter Lucy, Cody and Bailey Nickles, JoAnn Lewis and a host of cousins. He is also survived by six siblings, Missy Watson Hicks, Theresa Hannah, Trish Williams, Bobby Watson, Rick Knight, and Greg Pratt . He was preceded in death by his father, Buddy Watson, mother, Debbie Marcum, sister, Cindy Watson, and cousin, Alice Anne Caldwell. Visitation will be held on Thursday, July 25, 2019, at Kernodle Funeral Home from 6 to 8 PM. Funeral services will be held on Friday, July 26, 2019, at Kernodle Funeral Home at 11 am with a United States Flag presentation by the Federal Bureau of Prisons. In lieu of flowers donations may be made to the Correctional Peace Officers Foundation.

The family of Buddy Watson created this Life Tributes page to make it easy to share your memories.

Send flowers to the Watson family.