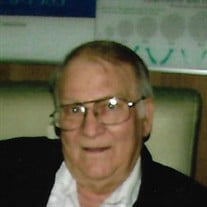 Bobby Lee Williams Sr. entered the gates of heaven September 15, 2017 at the age of 77. Bobby was born January 6, 1940 to Anderson and Aretta Williams. He was preceded in death by his parents, brothers Roy, Henry, & Kenneth and sister Shelby. He is survived by his wife of 57 years, Beverly Williams, four sons, Bobby Jr (Debbie), Marty (Vicki), Steve, and Corey (Amy), nine grandchildren, and two great-grandchildren. He is also survived by a brother, Roger Williams (Ann), and sisters Joann Bunn (Phillip) and Shirley Wilcher (Gary). Bobby graduated from Harrisburg High School and served his country in the United States Navy and the National Guard. Bobby spent over 30 years working in the manufacturing industry before retiring and working in the local school district. Bobby coached for over 20 years in the local pee-wee, little league, pony league and jr. babe ruth baseball programs and taught hundreds of young men not only about baseball, but also about how to succeed in life. He loved fishing, hunting and watching sports. He was a member of Vanndale Baptist Church and lived his life in a way that all Christians should. He was a great man and will be missed by many. Pallbearers will be Nick Richardson, Matthew Mooney, Tony Jones, Bert Greenwell, Dean Burnett, and Kelly Phipps. Honorary Pallbearerswill be his grandchildren and great-grandchildren-Valerie Wiliams, Whitney Hunter, Dalton Williams, Lauren Williams, Hana Williams, Hunter Williams, Alex Williams, Lauren McGhee, Logan Williams, Austin Kirby and Cash Hunter. Visitation will be held on Monday, September 18, 2017 from 6 to 8 PM at Kernodle Funeral Home. Funeral services will be held on Tuesday, September 19, 2017 at Vanndale Baptist Church at 10 AM with burial in the Arkansas State Veteran's Cemetery at Birdeye, with military honors.

Bobby Lee Williams Sr. entered the gates of heaven September 15, 2017 at the age of 77. Bobby was born January 6, 1940 to Anderson and Aretta Williams. He was preceded in death by his parents, brothers Roy, Henry, & Kenneth and sister Shelby.... View Obituary & Service Information

The family of Bobby L. Williams Sr. created this Life Tributes page to make it easy to share your memories.

Send flowers to the Williams family.