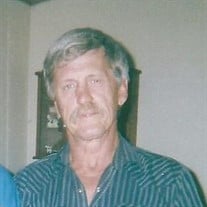 Mr. Billy Auther Henry died Monday, May 9, 2016, in El Paso, Texas at the age of 60. Billy was born in Wynne, Arkansas on October 12, 1955 to Buster and Bernice Henry. He was a long haul truck driver. Survivors are his mother, Bernice Shoumake... View Obituary & Service Information

The family of Billy Auther Henry created this Life Tributes page to make it easy to share your memories.

Send flowers to the Henry family.