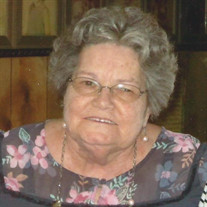 Bessie "Bet" Anderson, age 83, went to be with her Lord and Savior, March 18, 2017 while living near her family in Skiatook, Oklahoma. Bet was born in Wynne, Arkansas on August 20, 1933 to Lula and Guy Brawner. She was the youngest of six Brawner children and is survived by her sister, Wilma Womack of West Memphis, Arkansas. Bet spent most of her life in the Wynne area until moving to Oklahoma in 2009 to be near a son and daughter in Skiatook. She was married to the late Edward Dearing in July 1949 and is survived by their three children, Larry Dearing and wife Helen, Sandy Roberts and husband Bobby, Lynda Gail Smith and husband Eldon Smith. She has nine grandchildren and twenty eight great grandchildren. In January 1979, Bet married the late Joe Anderson and lived near Colt, Arkansas, becoming part of the Anderson family with Joe's six children. Joe and Bet were married over 29 years at the time of Joe's death in September, 2008. On the Anderson side, Bet is survived by Danny Joe Anderson and wife Joyce, Debra Davidson and husband Louis, Sue Barnett and husband Paul, Keith Anderson and wife Charlotte, and Sheris Richardson and husband Todd. The Anderson clan have nine grandchildren, fourteen great-grandchildren and five great-great grandchildren. Bet is also survived by sister-in-laws Leeta (Brawner) Perkins, Pat (Dearing) Ward and Glenda (Dearing) Parks and a host of nieces, nephews, cousins and friends. While living near Wynne, Bet was a long time member of Fitzgerald Crossing Baptist Church. In her final years in Oklahoma, she was an active member of Immanuel Baptist Church in Skiatook. Visitation will be Wednesday, March 22, 2017 from 1 to 3 PM at Kernodle Funeral Home with funeral services following at 3 PM. Burial will be in Cogbill Cemetery. Memorials may be made to Fitzgerald Crossing Baptist Church, 422 Hwy 1, Wynne, Arkansas 72396.

Bessie "Bet" Anderson, age 83, went to be with her Lord and Savior, March 18, 2017 while living near her family in Skiatook, Oklahoma. Bet was born in Wynne, Arkansas on August 20, 1933 to Lula and Guy Brawner. She was the youngest of six... View Obituary & Service Information

The family of Bessie Mae "Bet" (Brawner, Dearing) Anderson created this Life Tributes page to make it easy to share your memories.

Bessie &quot;Bet&quot; Anderson, age 83, went to be with her Lord and Savior,...

Send flowers to the Anderson family.