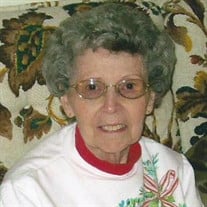 Bernetta Winkler of Wynne, Arkansas, passed away Tuesday, August 25, 2015, at The MED in Memphis, Tennessee, at the age of 92. Bernetta is survived by her children, William "Bill" Winkler of Wynne; Roger Winkler of Wynne; Thomas "Tommy" Winkler of Wynne; Dorothy Taylor of Wynne; and Margie Goodwin of Wynne; ten grandchildren and eight great grandchildren. She is preceded in death by husband, Herbert Winkler; parents, Emil and Lillian Hager Moonier; brothers, Glennon, Jesse, and Frances Moonier; sisters, Aileen Elder and Lillian Schmidt. Bernetta was born on March 12, 1923 in Perryville, Missouri to Emil Moonier and Lillian Hager Moonier. She married Herbert Winkler in 1944. Over time, the couple welcomed five children into their home. Her children remember her as a kind and gentle mother. After moving to Wynne, Arkansas, from Perryville, Missouri in 1960, Bernetta began working for Addison Shoe Company and worked for 22 years before retiring. She was a member of St. Peter's Catholic Church. A Rosary is scheduled for 7:30 PM at Kernodle Funeral Home Sunday, August 30, 2015. Visitation will be Sunday from 6 to 7:30 PM at Kernodle Funeral Home, under the direction of Kernodle Funeral Home in Wynne. Visitation in Perryville, Missouri will be Monday, August 31, 2015 from 11 AM until 12 PM with graveside services following at 1 PM at Mt. Hope Cemetery in Perryville, Missouri, under the direction of Miller Family Funeral Home in Perryville, Missouri. In lieu of flowers, please send memorials to St. Peter's Catholic Church, 1695 N. Falls, Blvd., Wynne, Arkansas 72396.

The family of Bernetta Juanita Winkler created this Life Tributes page to make it easy to share your memories.

Send flowers to the Winkler family.