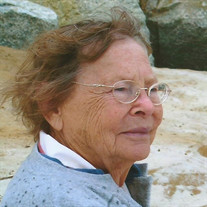 Mrs. Anna Marie Weindel of Wynne, Arkansas, died Saturday, January 28, 2017 in Conway, Arkansas, at the home of her daughter; she was 87. Anna was born in Pocahontas County, Iowa on June 8, 1929 to Joseph and Mary (Sklenicka) Vavricka. She has been a resident of Wynne, Arkansas since 1959. She was a member of St. Peter's Catholic Church in Wynne, and recently attended St. Joseph Catholic Church in Conway. Anna enjoyed her family, bread making and loved her garden and flowers. She loved all people, especially children. She loved to cook and can. She could feed an army or just a few. Her love for her God, family and friends was the guide for how she lived her life. She was preceded in death by her parents, Joseph and Mary Vavricka, beloved husband, James (Jim) A. Weindel, infant daughter, Nancy Weindel, sisters, Albina Vavricka and Charlotte Glover and brothers, Frank Vavricka and Joe Vavricka. She is survived by her sons, Tommy Weindel (Lynn) of Alexander, Arkansas, David Weindel (Joann) of Danville, Arkansas, Kenneth Weindel (Sissy) of Wynne, Arkansas, daughters, Virginia Lawson (Roger) of Conway, Arkansas, Mary Arnold (Kelly) of Arlington, Tennessee, Treasa Massery (Antoine) of Vilonia, Arkansas, Judy Andrepont (Blaise) of Scranton, Arkansas, Susan Padgett (Danny) of Benton, Kentucky, brother, Jimmy Vavricka (Nancy) of Cedar Rapids, Iowa, 23 grandchildren and 17 great grandchildren. Visitation will be Tuesday, January 31, 2017 from 6 PM to 7 PM, with rosary beginning at 7 PM at Kernodle Funeral Home. Funeral services will be Wednesday, at 10 AM at St. Peter's Catholic Church with burial in Cogbill Cemetery. In lieu of flowers, memorial may be made to St. Peter's Catholic Church, 1695 Falls Blvd., Wynne, Arkansas 72396 or to a charity of the donor's choice. She will be missed by all who knew and loved her.

Mrs. Anna Marie Weindel of Wynne, Arkansas, died Saturday, January 28, 2017 in Conway, Arkansas, at the home of her daughter; she was 87. Anna was born in Pocahontas County, Iowa on June 8, 1929 to Joseph and Mary (Sklenicka) Vavricka. She... View Obituary & Service Information

The family of Anna Marie Weindel created this Life Tributes page to make it easy to share your memories.

Send flowers to the Weindel family.